The Alpena Post Office, a modern mass two story building of Indiana Bedford Stone, is situated on the south bank of the Thunder Bay River and faces Water St.

Through the large swinging doors one enters into a spacious lobby having terrazzo floors and wainscoted with beautiful grey marble. The large windows are of polished glass set in steel sashes. The first floor is used entirely by the postal department with its various rooms. Mr. Sam Davison is Post Master. Phone 511.

At the end of the front lobby trevertine marble treads to the second floor where one enters a long terrazzoed floor hall. The first door to the right from this corridor leads to the Civil Service Commission under the management of Miss Hariot Hansen. Directly opposite this room is the one occupied by the Deputy Collector of Customs with Mr. Robert J. Kurtz in charge. This office is opened only in the evenings.

The room next to this houses the County Agricultural Society which is a branch of the U.S. Field Dept. of Agriculture. Mr. Charles Blivin of the Extension Service is in charge with Miss Norma Duby head of the 4 H Club as assistant. Phone 535.

The U.S. Weather Bureau maintain the following three rooms for their offices. Mr. A Wiesner is the Meteorologist in charge while Mr. Thomas R. Coen is assistant. Phone 89.

The National Re-Employment Services, a branch of the U.S. Department of Labor also has quarters on the second floor of the Federal Building. Here 5,500 people are registered for labor in fo[u]r Counties. This number represents the active and inactive number of those who are registered at the office. Mr. Louis is branch manager and Miss Frances Faber is the assistant. The phone number is 257.

The Federal Building is a massive two-story building constructed of Indiana Bedford Stone. The first floor was entered from Water Street through large swinging doors into a spacious lobby that had terrazzo floors and was wainscoted with rich, grey marble. The windows were of polished glass set in steels sashes. Various rooms were on the first floor...and all were used by the United States Postal Department.

At the end of the front lobby a stairway, covered in travertine marble, led to the second floor..and to a long hall with terazzoed floors. The first door one encountered on the right led to the office of the Civil Service Commission. Directly opposite that room was the one that was occupied by the Deputy Collector of Customs. The office was opened in the evenings. A customs office was necessary, for there were so many ships entering and leaving our harbor - both night and day. The room next to this housed the County Agricultural Society...a branch of the United States Field Department of Agriculture.

The United States Weather Bureau occupied three rooms for their offices. And the National Re-Employment Service, a branch of the U.S. Department of Labor, also had offices on the second floor. Th their offices, 5,500 people were registered for labor in four area counties. This number represented the active and inactive number of those who were registered at those offices.

The Federal Building has served our city and county well...and hopefully it will be allowed to continue. I have a bit of personal interest in this building (and others in Alpena) because my grandfather, Robert T. Haltiner, worked on them. He worked on the Federal Building, was construction superintendent for Memorial Hall (the Armory), built the fire station that once was on Ninth Street, the bank that was on the corner of Chisholm Street and Ninth Street (now an office building), the St. Bernard's rectory on the corner of Lockwood and Sixth Streets, Mayor Piepkorn's home on the corner of Mirre and Third Streets, and others. He was in charge of construction at Huron Portland Cement Company for many years...and during World Was II was sent out east to head a crew of workers in the construction of military buildings and housing. 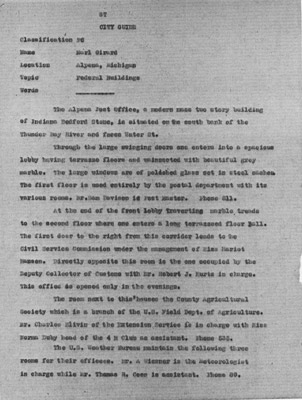