Media Type
Image
Item Type
Negatives
Description
Most of the following was taken directly from an article published in the July 2008 issue of Michigan History Magazine titled “A Historic Cannon Comes to Alpena” written by Raymond Herek.
The battleship MAINE became famous when an explosion destroyed her in the harbor at Havana, Cuba, on February 15, 1898. The tragedy that killed 266 U.S. officers and sailors led to the U.S. declaration of war against Spain.” [Thus, the beginning of the Spanish-American War.] The war left the United States … with new possessions of Puerto Rico, Guam, the Hawaiian Islands and the Philippines.
…the USS MAINE…remains were raised [from Havana Harbor in March of 1912], towed four miles out to sea and, amid a solemn ceremony, sunk in six hundred fathoms of water.
[At the same time] the MAINE was laid to rest, Republican congressman George A. Loud of Michigan forwarded to the Navy Department…resolutions sent him by the …city of Alpena… request[ing] “the loan of a piece of naval ordnance of historical interest.” Two weeks later, Secretary of the Navy…Newberry, a Detroiter, informed Loud that the Navy Department would loan Alpena a six-inch gun taken off the MAINE.
The MAINE carried four ten-inch guns, mounted in pairs fore and aft, and two secondary or broadside batteries of three six-inch guns on either side of the ship. Fourteen smaller cannon and four torpedo tubes completed the ship’s ordnance. When the explosion occurred in 1898, the two forward ten-inch guns were thrown into Havana Harbor; they were never recovered. The two aft guns were donated to the people of Havana and [are still on display there today].
The congressman most instrumental in pushing through legislation that led to the raising of the MAINE and interring sailors who remained on the vessel at Arlington National Cemetery was George A. Loud of AuSable…He had seen action during the Spanish-American War while serving aboard a U.S. vessel at the Battle of Manila Bay. On March 25, 1912, Congressman Loud…optimistically reported…that Alpena would receive the only gun from the MAINE “awarded to any city in the country.” [This is not completely accurate as a MAINE gun is permanently displayed at Portland, Maine, which probably occurred after Alpena’s gun was placed.] Alpena, of course, had to pay the freight for transporting the 20,000 pound gun and carriage from California to Michigan…and freight charges came to two hundred dollars.
The MAINE cannon arrived in Alpena on May 9, 1912, by special railroad car, and the [city] council began planning a festive Independence Day for its unveiling.
Thursday, July 4, 1912, dawned sunny and humid. Before the dedication [at city hall], a parade wound its way through the downtown streets. [Two thousand men and veterans from both the Spanish-American War and the Civil War were reported to have participated in the parade and that some 10,000 people attended the entire day’s events.]
Flags flew from every possible point on the city hall. The ceremonies opened with the singing of “Hail Columbia,” followed by a few remarks from Mayor Dafoe. Reverend Stuart offered a prayer, and William Donovan, a 1912 graduate of Alpena High School, read the Declaration of Independence. When Congressman Loud finished addressing the crowd, his daughter Priscilla cut the cords that tied the flags to the gun…“displaying the substantial mass of steel, shining brightly in the sun, excepting for the scars here and there which gave some idea of the gun’s eventful history.” At that same moment, the band began playing…and the crowd enthusiastically cheered and clapped. Former state senator Charles R. Henry then detailed the gun’s history.
[It will be noted here that the carriage of the cannon had been painted with a terra cotta colored primer to protect it from the elements and had been neglected to be completed with black paint for the unveiling, so members of the chamber set out at midnight by light of a car’s headlamps to complete the needed paint job.]
…a memorial tablet, cast from metal recovered from the MAINE, was [presented to the city on August 18, 1913] and…affixed to a concrete foundation next to the gun. [A matching plaque is mounted at the USS MAINE monument in New York City.]
Today [103 years later], the MAINE cannon [is still “on loan” to the city of Alpena] and still sits in front of Alpena’s city hall… It remains a silent memorial to one community’s effort to honor the loss of one of America’s great warships and the deaths of so many of its sailors. 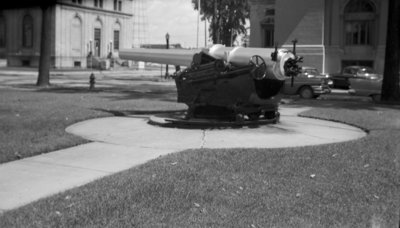