Media Type
Image
Item Type
Slides
Description
Alpena Central High School. "The new building was modern as of the period...it had a circular tower of stone cut in the Alpena stone quarries. The old bell...was installed in the tower. The front of the building was of cut stone and the remainder brick. It was a two-story building with a basement level with the street. It provided for the library and elementary grades on the first floor, and for the high school and laboratories on the second floor. The assembly room seated 120 pupils. The Smead system of ventilating was carried out throughout the building, which system also prodived for inside sanitary plumbing. The offices and laboratories were lighted with gas." from "A Century in the Alpena Schools" by Ella M. White.
Notes
A little history
The Union School was completed in 1868 on the block of Second and Dunbar Street.

However, the town continued to grow. The board determined the school was not large enough. So in 1889 the Union School was demolished making way for the new School.

Alpena Central High School was completed in 1891. It contained Fourth to Sixth grade on the first floor and High School classes were on the second floor.

A Study Hall, a stage, more classrooms, a library, gymnasium, and an office for the school nurse was added in the 1920’s. The community was very proud of their school.

The community was devastated when the school burned down on April 14, 1940.

Classes were then held in local buildings like the Memorial Hall, the Boys Club, the Civic League and the American Legion. 10 days after the school burned the children were attending their classes again.

This picture was taken one year before the school burned.
Date of Original
c 1900
Dimensions
Width: 5360 px
Height: 3631 px 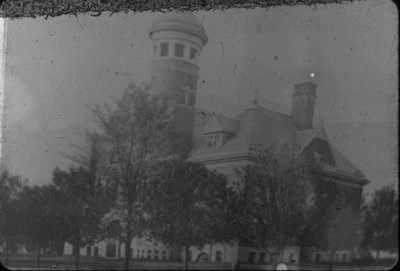